PRODUCER AND JOURNALIST DISPATCHING FROM THE BORDERLANDS ON THE INTERSECTION OF MIGRATION AND POLITICS AND THE PEOPLE IN BETWEEN.

An American family finds their way in Mexico after deportation

The laundry bags kept falling from the stroller onto the uneven and narrow sidewalk. With her daughter, Sedona, strapped onto her back and her son, Adero, in tow, Katerina Barron stood in a sweat, speechless in front of the lavandería attendant. Her husband, Jesus, wasn’t there to translate her questions into Spanish.
PRI/Public Radio International Link to Story

the prisoners chanted to the TV cameras in protest. It was 4 February 2009. More than 200 Latino men in black-and-white striped uniforms, shackled to each other, were being marched towards an outdoor unit especially for “illegal alien” prisoners in Arizona’s infamous jail, Tent City. The chants were directed at the Maricopa County sheriff, Joe Arpaio, who a few months before had called this outdoor jail close to downtown Phoenix – his own tough-on-crime creation – a “concentration camp” in a speech to political supporters at his local Italian-American club.
The Guardian Link to Story

Sara's Demons Crossed the Border with Her

This girl is from far away, El Salvador, but her story is familiar to many here. Sara (not her real name) is the face of hundreds of thousands of unaccompanied minors who have come to the United States from Central America. She left behind a childhood of abuse, bringing along the wounds of trauma.
Phoenix New Times Link to Story

Reporter Valeria Fernandez took a trip to southern Mexico, the place where, for so many unaccompanied minors, the journey to the US begins. Two Americans trailer, Valeria’s documentary about undocumented immigrant children in Arizona: Follow Valeria Fernández's journey through Mexico's southern border by clicking on the arrow on the right.
Radio Ambulante Link to Story

Carlos was so scared inside the Mexican immigration detention center that instead of telling officers he was fleeing El Salvador after gang threats, the 16-year-old asked to be deported back to his country. He shouldn’t have had to make that choice. Because, according to Mexican laws, as a minor he shouldn’t have been in an immigration detention center in the first place.
PRI/Public Radio International Link to Story

When Maria was detained by immigration officers, she was relieved that at least her children would stay safe with her sister in Atlanta after they deported her. Two months later, on January 2, that small comfort was gone. She stood on her sister’s doorstep at 5 a.m. with armed immigration agents who took her there to identify her children and take them away.
PRI/Public Radio International Link to Story

Few Child Refugees Get to Stay Here Legally. Meet One of the Lucky Ones

On a Wednesday afternoon in May, he takes a break from his job flipping burgers at a McDonald’s on Central Avenue in Phoenix to sit down and talk, sipping a frozen caramel coffee drink and rubbing his almond eyes. A brown rosary peeks from beneath his shiny black uniform. He’s shaved both sides of his head, taming a few meticulous black curls atop with gel.
Phoenix New Times Link to Story

He’s been deported twice. This third time, his family is leaving the US with him.

Katerina Karrys Barron packed her two toddlers in the back seat of her gold Honda sedan and set course towards Mexico. She hadn’t slept all night, and it seemed like the months her husband was detained were an eternity. “I don’t know whether to laugh or cry when I see him,” she said, as she got on Interstate 19, the highway that leads to Nogales, Arizona.
PRI/Public Radio International Link to Story

Karyna Rodríguez Jaramillo walks past the last blue security door of the Eloy Detention Center on a Saturday morning in April. Her team of volunteers drove for more than an hour to visit detainees who identify as LGBTQ held at the private immigration prison 66 miles outside Phoenix. She is dressed in black tennis shoes, yoga pants and a short-sleeve t-shirt layered over white long sleeves.
Feet in 2 Worlds Link to Story

Valeria Fernández is a recipient of the 2018 American Mosaic Journalism Prize awarded by the Heising-Simons Foundation.

She has been reporting on Arizona’s immigrant community and the many angles and faces of the immigration debate for over 15 years.

She migrated from Uruguay when she was in her 20s and started a career in journalism in 2003 for the weekly newspaper La Voz. In 2004, the National Association of Hispanic Publications named Fernández “Latina Journalist of the Year."

She's worked as a field producer for Extreme World on Sky TV, Discovery Channel Spanish, and Channel 4 in England.

Fernández co-directed and produced "Two Americans," a documentary that parallels the stories of Sheriff Joe Arpaio and a 9-year-old U.S. citizen whose parents were arrested by the sheriff’s deputies during a workplace immigration raid. The film won the Audience Award for Best Feature Documentary at the Arizona International Film Festival. It aired on Al Jazeera America in 2013 and was an official selection of the DOCSDF Mexican Film Festival.

In 2014, Fernández co-directed six short documentaries along the U.S.-Mexico borderlands as part of the international web-documentary Connected Walls.

In 2015, she was a producer and reporter for the Arizona Center for Investigative Reporting on a project that cast light on the economic and social impacts of a mine spill in Northern Mexico that broadcast in PBS, San Diego. The multi-media project won an Arizona Press Club recognition for environmental reporting.

As a fellow for the International Center for Journalists she published stories in 2017 for PRI's The World, and NPR’s Spanish podcast Radio Ambulante on human rights violations tied to the incarceration of Central-American youth

This year she is a fellow for the Adelante initiative of the International Media Women Foundation. She's covering issues at the intersection of trauma, deportation and migration.

She also runs Cronkite Noticias, a bilingual digital and broadcast media platform for journalism students as a professor at the Walter Cronkite School of Journalism in Arizona State University. 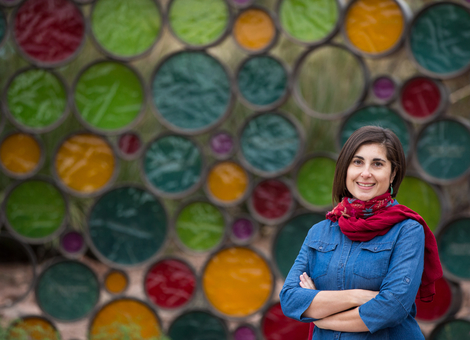